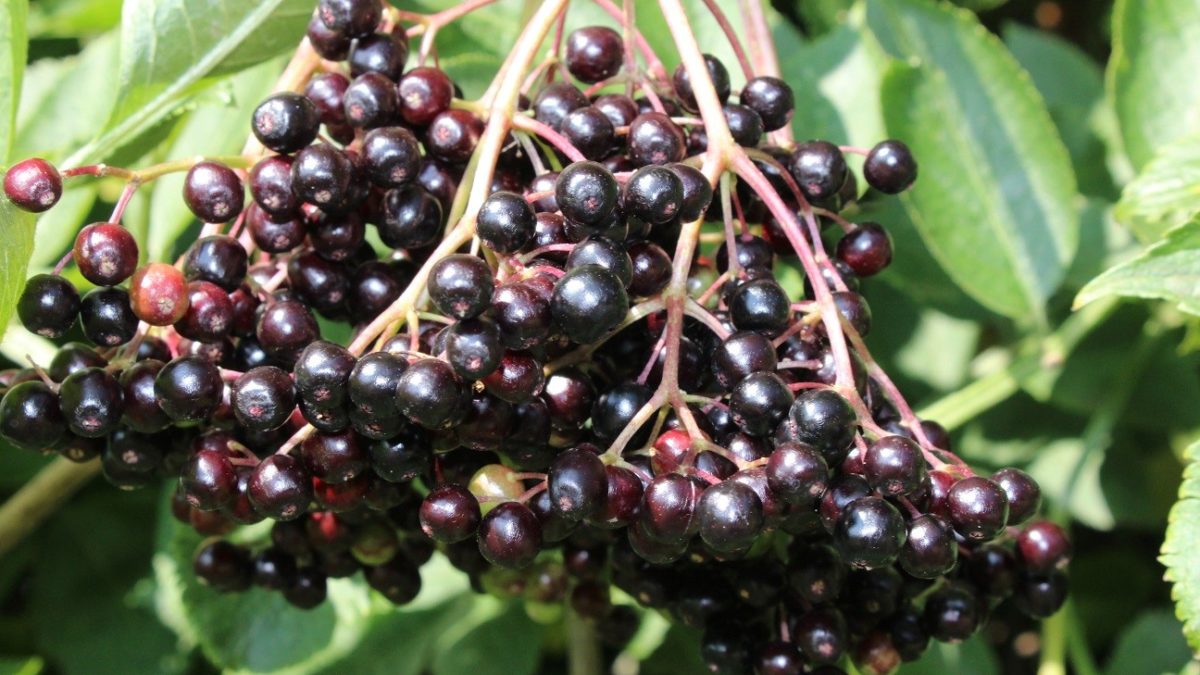 The black elder (Sambucus nigra) is a shrub or small tree up to 3 m high (rarely up to 8-10 m) with well-developed root system. The plant is also called elder, elderberry, etc. in the different parts of Bulgaria.

It has been honored for centuries because of the wide range of healing actions, as even magical properties had been attributed to it. It is often called the Bulgarian ginseng.

The black elder blooms from spring to autumn. A small fruit develops on the place of each blossom. At first, the fruits have greenish-red color that goes through different shades of red-blue-purple until it reaches the final blue-black color of the mature fruit. The ripening of the fruits takes place at the end of autumn.

The elderberry fruits are formed in hanging clusters like bunches, as this is the easiest distinguishing feature from dwarf elder or danewort (Sambucus ebulus), whose fruits grow upright. Dwarf elder is a perennial herb growing as single stems.

Almost all parts of the plant are used: the blossoms of the plant which are harvested before their full blooming in the months of May and June; they are dried and teas, potions, oils, ointments, creams, tinctures, syrups and elixirs are prepared from them; the fruits – their gathering begins in the current season – in the first autumn days; only the well-ripened are picked early in the morning, because the unripe contain toxic cyanogenic glycosides; jams and marmalades are prepared from the fruits, as well as syrups, tinctures, elixirs, teas, decoctions, sucking tablets, dyes etc.; the leaves – they find application in different therapeutic formulas. 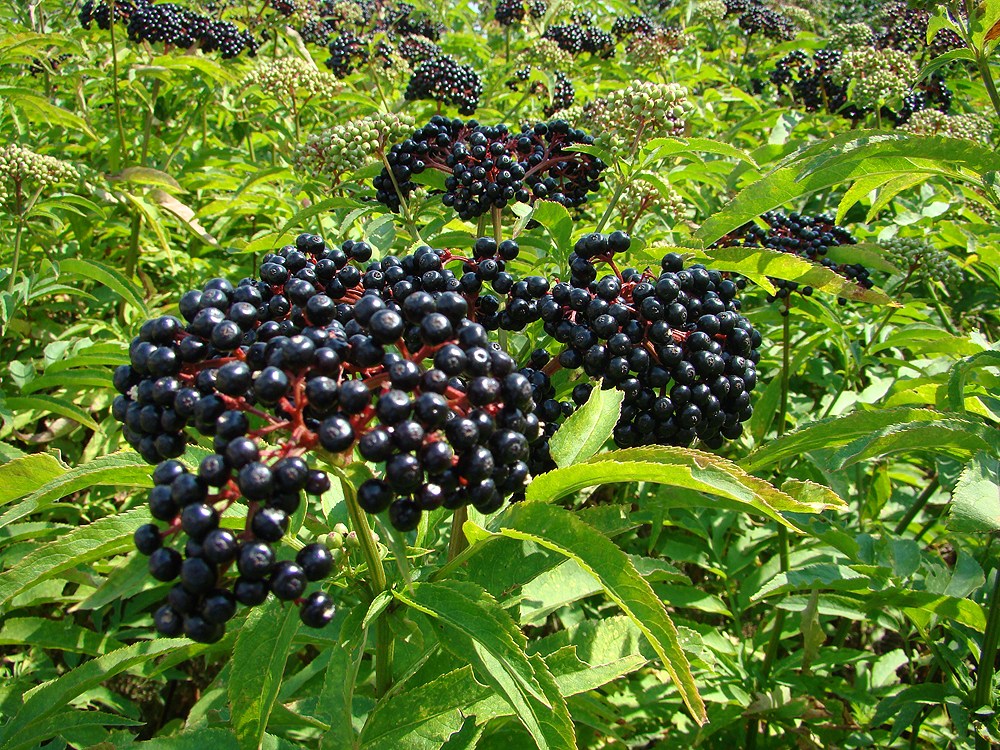 The elderberry fruits, which are ripening in the current period – by the end of August and the beginning of September, contain pectin and cellulose. They have a sweat reducing, laxative and diuretic action, and help in lowering the high temperature, mainly due to the glycosides. The fruits are rich in valuable minerals and microelements, which most often are not enough in the food during the winter season. The whole plant is used for regulation of metabolism, and this in turn helps maintaining body weight in normal limits. To regulate metabolism, one tablespoon of dried elderberry fruit, soaked from the evening in 200 ml slightly warm water is recommended. The liquid is strained on the following morning and drunk before breakfast. Because of the high vitamin C content in the fruits, tea of the elderberry fruits is especially suitable for smokers who need additional amount of vitamin C.

The black pearls of the forest, as the elderberry fruits are also called, have a proven immunostimulating action and help in strengthening the organism’s defense forces in the transient seasons, associated with flu and flulike conditions. Moreover, they have an excellent detoxifying effect and can be used in skin problems such as acne and rashes.

The powerful immunostimulating effect of black elderberry is known from time immemorial and is recommended by many healers in our lands. Such is the folk healer Peter Dimkov, according to whose words this is a “miraculous plant” that significantly improves the health condition.

As with any immunostimulating substance, caution should be applied to the black elder as well. It should be avoided by pregnant and lactating women, as there is insufficient information regarding its safety. It shouldn’t be recommended also to patients with severe kidney diseases, obstructed bile ducts or gallstones. The patients with insulin-dependent diabetes and those suffering from autoimmune diseases such as rheumatoid arthritis, lupus, multiple sclerosis or the acquired immunodeficiency syndrome (HIV/AIDS) should consult a physician before use. The possible drug interactions also should be considered – the black elder medications may interact with immunosuppressive agents and diuretics. They may also reduce the extent of absorption of opiates.

The recommended intake of the black elder syrup is as follows:

1 tablespoon for the black elder syrup (for children 1 teaspoon) every morning before eating from autumn to spring. The dried berries are taken as 1 tablespoon is boiled with 400-500 ml of water. The liquid is strained and consumed one –two times a day. You can also take a few dried berries a day directly by chewing /but not more than 5-10 pieces/.

The fruits of the black elder are a whole pharmacy for our health, as long as we know how to apply them. Autumn is the time to strengthen the immune system. The good prevention is the best care and investment for good health.

Which diet is thes fastest?