As autumn comes the collecting of the fruit of one widespread at our lands plant begins – black elderberry. The old people call it elder tree, because its branches have soft core which is easily removed. It has found wide application in folk medicine, as all its parts are healing and this is the reason why today’s nutritional science puts it in the leading place of the rankings for “Superfoods”.

There are three main types of elderberry – danewort /dwarf elder/, dendroid /elderberry/ and red elder. The danewort grows throughout Europe and Asia and offers a wide range of medicinal properties. It blooms in July-August in thick snow-white flowers, gathered as tufty clusters in a large bunch. The small black fruits mature in the end of summer around September. 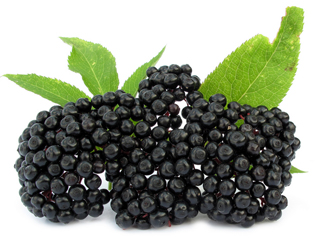 The elder tree has yellow-white small blossoms and larger black berries which are shiny and globular and contain 3 brown seeds each. The fruits of the two type of elderberry are harvested without the stalks and must undergo heat treatment before use. This is necessary in order the harmful glycosides sambunigrin and sambucine to be broken down. Only the well ripe berries are used, which also contain carotene, vitamin C, iron, vitamins from the B group, amino acids, malic and tartaric acid, etc. The extract from the elder berries has a strengthening effect upon the organism in the winter days, supporting the immune and hematopoietic system. It has a very good action in colds, rhinitis, tonsillitis, cough, also in neuralgias and affects beneficially the urinary system. The richness of anthocyanins, pectin and cellulose determines the strong antioxidant effect of black elderberry and its role in the extraction of heavy metals and radioactive isotopes from the organism. The miraculous black berries in fresh form in autumn or dried in winter are one of the best natural remedies to treat anemia.

The folk healer Petar Dimkov considers it as “the most powerful Bulgarian herb”. In his notes he claims that the swallows supply themselves with energy for the journey, when they go to the south, as they eat elderberries.

They can be sweetened with white or brown sugar or to be jellied according to the taste. The juice from the black elderberries is a traditional remedy against colds, and its preparation is quite simple.

Here is my favorite recipe:

Wash the berries, boil them in a little water, defoam, strain and fill in clean bottles. Boil the closed bottles for 10 minutes.

The syrup from the fruits strengthens the defense forces of the organism, increases hemoglobin and regulates metabolism.

The healing super berry can be consumed in another way as well – hydrate a teaspoon of it (or 15-20 grains) from the evening with little water, strain on the next morning and drink this magic cocktail on an empty stomach. The effect is the same if some dried fruits are taken on an empty stomach in the morning together with a glass of water. Another way is soaking of 300 g dried fruits with 1 kg of sugar, cinnamon /optional/ and 1 l of water for about 20 days. Then the mixture can be diluted with water and drunk regularly.

Finally it is right to say that the black elderberry should not be taken internally by pregnant and breastfeeding women because of the risk of glycoside toxicity.

What is the worst evil - sugar, saccharin, NutraSweet* or stevia?

What to eat to not gain weight if we do not exercise regularly?

Water with lemon and peppermint or home-made lemonade …