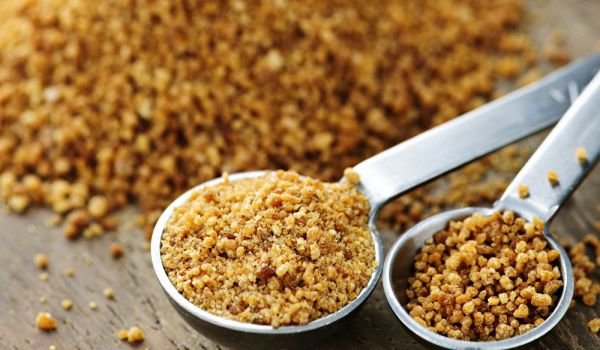 Coconut sugar is not something new. It has been used since Antiquity in South and Southeast Asia as a way to sweeten various meals and beverages. Today its popularity is gaining speed.

Coconut sugar is made from the nectar of coconut palms (Coco nucifera).

It is extracted not from the fruits but from the flowers: they are cut and the semi-translucent juice, which begins to flow, is collected in bamboo containers. Then the liquid is heated in order the water content to be evaporated (which is about 80%).

A dense mass is formed, similar to a thick syrup, which after cooling is broken down into crystals or granules.

The glycemic index of coconut sugar, according to the results of studies conducted in the Philippines, the USA, Japan and Australia, is between 35 and 54 GI per serving. The other sugars, in comparison, such as refined white sugar, muscovado and molasses, have a glycemic index between 65 and 100 per serving.

Another natural sweetener, such as the sugar from dates for example, has 100 GI per serving. Maple syrup has 69+ GI, and honey has 70+ per serving.

Unlike the agave nectar which contains 90% fructose, coconut sugar has less than 9% of this potentially triglyceride-forming substance.

Coconut sugar is rich in vitamins from the B group, including thiamine, pyridoxine, nicotinic acid, biotin, pyridoxal and inositol.

Special attention is paid to the inositol content, which is so important for neurotransmission, cholesterol metabolism and redistribution of fats in the body.

Coconut sugar contains as many as 16 of the 20 amino acids, especially glutamic acid, which is mostly used by the brain as a fuel. It detoxifies ammonia by removing nitrogen atoms in a process in which another amino acid is produced – glutamine. The conversion of glutamic acid into glutamine is the only way ammonia in the brain can be detoxified.

Glutamic acid helps in correcting personality disorders and is used for treatment of behavioral disorders in children. It is used in the treatment of epilepsy, mental retardation, muscular dystrophy, ulcers and hypoglycemic coma, a complication in the treatment of diabetes with insulin. It is a component of folic acid – a vitamin from the B group, which helps the organism to break down amino acids.

As one of its salts is monosodium glutamate, glutamic acid (and coconut sugar in particular) should be avoided by the allergic to this substance.

Coconut sugar can replace 1:1 white sugar and recently becomes a more popular substitute of agave in the raw and vegan recipes. It is especially suitable for sweetening coffee and hot chocolate, great for glazes and all sorts of desserts.

This is an alternative recipe for the standard favorite oven baked macaroni because the products I use are wholegrain and natural. For sure this recipe is much healthier and more nutritious than the standard one. Try it, it doesn’t take much time, and there is no way to go wrong:

Strawberries - how do we get the most out of them? What form is best used?

How do I know if there are pesticide residues in strawberries and how can we reduce the risk of pesticides?

What is the difference between coconut and palm oil?