Question: The fruits of black elder are much praised as healing but the information how it is most useful to boost the immune system in winter is controversial – dry fruits, syrup, tea. I don’t know if there are any contraindications. Different doses are mentioned and I saw in one place it can be overdosed. Give a recipe, please. Does it heal cirrhosis and gastrointestinal disorders?

Black elder for sure is one of the most praised Bulgarian herbs and this is not accidental. In the folk medicine this healing plant has found wide application, as all its parts are used. That’s why today’s nutrition science puts it in the leading position of the so popular “Super foods” or “Drug foods”.

The small black fruits are fully mature until the end of summer and having gathered all the solar energy inside, they are extremely rich in carotene, vitamin c, iron, vitamins from the B group, amino acids, malic and tartaric acid etc. In the winter days the extract from the fruits of the elder increases the strength of the organism, supporting the immunity and the hematopoietic system. It has very good action in colds, fever, tonsillitis, cough, also in neuralgias and affects positively the urinary system. The richness of anthocyanin compounds, pectin and cellulose determines the strong antioxidant effect of black elderberry and its role in the extraction of heavy metals and radioactive isotopes from the body. The miraculous black fruits in fresh form in autumn or dried in winter are one of the best natural remedies to treat anemia. According to the taste they can be sweetened with white or brown sugar or to be jellied. The juice of the black fruits is a traditional remedy for colds and its preparation is quite simple. Here’s my favorite recipe:

Wash the berries, boil them with little water, defoam, strain and fill in clean bottles. Boil the closed bottles for 10 minutes. The syrup strengthens the defense forces of the organism, increases hemoglobin and regulates metabolism.

The healing super berry can be consumed in another way as well – hydrate a teaspoon of it (or 15-20 grains) from the evening with little water, strain on the next morning and drink this magic cocktail on an empty stomach. The effect is the same if some dried fruits are taken on an empty stomach in the morning together with a glass of water. Another way is soaking of 300 g dried fruits with 1 kg of sugar, cinnamon /optional/ and 1l of water for about 20 days. Then the mixture can be diluted with water and drunk regularly. 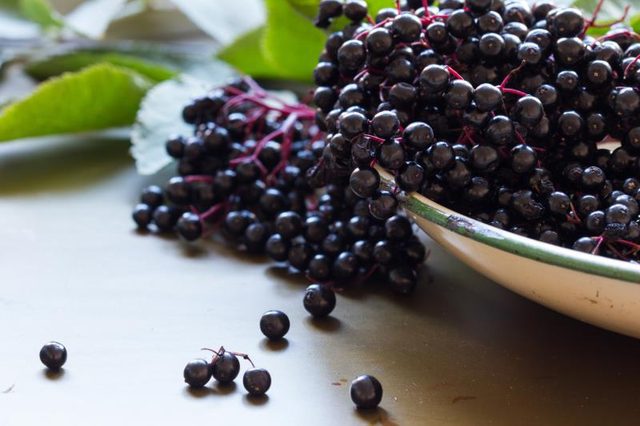 The black pearls of the forest – thus are also called the elder berries – are one of the most popular foods with anti-carcinogenic potential. The famous Bulgarian healer Petar Dimkov recommends their intake as one of the most powerful immunostimulants and without hesitation as adjunctive tool in all cancer diseases. Contrary to the logic of traditional medicine, the practice sometimes shows the healing effect of the consumption of black elderberry in cancer patients, and the significantly faster recovery in toxic liver damages. The richness of vitamin B 17 /laetrile or amygdalin/, resveratrol, mixed polyphenols, quercetin and flavonoids is the main reason for this effect of the black elderberries.

Proantocianides, as vitamin B 17, are regularly present in the nutritional regimen of Eskimos, the Hunza people, Abkhazians and many others. And the most interesting is that there was no single case of cancer in these tribes. Amygdalin is also found mostly in the seeds of the bitter almond, the pit of apricots, peaches, plums and other plants. The high content of this type of less active cyanides poses a risk of poisoning in increased consumption, so it should not be overdone and is not recommended for pregnant and lactating women.

In all other cases do not hesitate to take advantage of all parts of the plant. In the Bulgarian folk medicine the tea from the flowers is used also for treatment of urinary tract infections, in impotence, gout, high blood pressure, diseased kidneys and problems with the bladder and the prostate. A decoction of the leaves is used externally for baths in case of skin rashes, hemorrhoids, rheumatism.

Cashew - how to consume it and in what quantities?

The puberty has gone, but, unfortunately, not my acne!