There is a clear upward trend in the incidence of food allergies among children in the last years. It is believed they reach 6-8% in the first three years after birth with gradual reduction in adolescence up to 2%. One third of the children with atopic dermatitis possess food allergy as well. (1) The prevailing part of the suckling babies with food allergy later may develop other allergic diseases such as bronchial asthma, allergic rhinoconjuctivitis – a phenomenon known as “allergic march”. That’s why prevention of food allergies at an early age is considered as first step in the prophylaxis of bronchial asthma and the associated disorders later in life. A lot of clinical studies were held in the last years, focused on the link between nutrition of the suckling and prophylaxis of allergic manifestations. Most of them investigate several main aspects – the duration of breastfeeding, the role of protein hydrolysates, time of introduction of non-milk products and the use of pre-/probiotics.

According to WHO, “natural feeding (breastfeeding) is an essential way to provide ideal food for normal growth and development of the baby – it is an integral part of the reproductive process with important consequences for the health of the mother”. Except for psycho-social and economic advantages, breastfeeding reduces the frequency of acute infections and social diseases such as metabolic syndrome and type 2 diabetes. 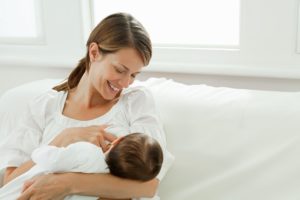 Analysis of 30 observational and interventional studies shows that the purely natural nutrition in the first four months in high-risk sucklings is associated with lower incidence of allergy to the cow’s milk protein (CMPA) up to 18 months of age. In addition, the children who were exclusively breastfed, have lower levels of serum IgE, lower incidence of atopic dermatitis, and rarer occurrence of bronchial obstruction. A randomized trial with the participation of children from several clinical centers, demonstrates the lack of major preventive effect of breastfeeding concerning allergic diseases – after a mean period of six years of follow up the frequency of bronchial asthma, allergic rhinitis, and atopic dermatitis did not differ significantly among the breast-fed babies and those fed with adapted milk. According to GINI (German Infant Nutrition Intervention) study, breastfeeding has a marked effect with regard to prophylaxis of allergic diseases only in high-risk children.

Hydrolyzed whey formulae are prepared on the base of hydrolyzed casein or hydrolyzed whey proteins. They are used in children with manifested cow’s milk protein allergy (CMPA). Most of the formulae are low-lactose with 50% medium-chain triglycerides. They are also suitable and used in severe malabsorption syndrome, short-bowel syndrome. The GINI study analyzes three different protein hydrolysates and compares them with the standard formula, and it finds out that sucklings fed with hydrolyzed milk have a significantly lower rate of allergic manifestations. An overview of the available studies in this field concludes that “there is insufficient evidence to support the advantage of hydrolyzed formulae over breastfeeding in the prevention of allergies”. There is limited data in high-risk children who cannot be breastfed that prolonged feeding with protein hydrolysates has a marked preventive effect concerning CMPA and other allergic manifestations.

The number of studies that trace out the link between formula feeding and the later development of allergies is quite limited. It is found that the early introduction of non-dairy products (before the fourth month) as well as feeding with foods such as eggs, nuts and fish products before one year of age is linked with a higher occurrence of atopic dermatitis up to ten years of age. Recently held studies showed that the delay of formula feeding in the course of time doesn’t prevent the development of allergic diseases at a later age. These contradictions require further research to establish the time of introduction of allergenic foods in suckling’s nutrition and their effect on atopic manifestations in childhood.

Although the use of pro- , pre- and synbiotics have not yet found a place in the current recommendations for suckling’s nutrition, many of the adapted milk formulae already contain such additives. Data from observational studies show presence of significant differences in the intestinal microflora of children with allergic manifestations and healthy ones – the sucklings with atopy have fewer amounts of bifid bacteria and more clostridia. The change of the intestinal microflora of children with atopy with the help of pro-, pre- or synbiotics may be a way for prevention of allergic diseases. The most commonly used probiotics include Lactobacillus and Bifidobacterium. Prebiotics are indigestible food ingredients that stimulate the growth and activity of intestinal microorganisms. They are found in breast milk and reach the colon unchanged where they potentiate bifidogenic microflora. A combination of 90% galacto-oligosaccharides and 10% fructo-oligosaccharides often is used for enrichment of the adapted milk formulae. A large number of clinical trials were held which study the effect of probiotics on the prophylaxis of allergic diseases (mainly atopic dermatitis) in high risk children. Most of them demonstrate efficacy of the probiotics in reducing the frequency of atopic skin manifestations, some show lack of effect, but none of them find preventive effect in respect of bronchial asthma and allergic rhinoconjunctivitis. The only study about prebiotics proves a significant reduction in the incidence of atopic dermatitis, urticaria and recurrent bronchial obstructions in children from the therapeutic group, compared to a control group. Just one study demonstrates the effect of synbiotics in prophylaxis of atopic dermatitis but not for the other allergic diseases.

Is it offal good to eat, especially lamb?

Happy & Healthy in the new school year in Anglo-American school