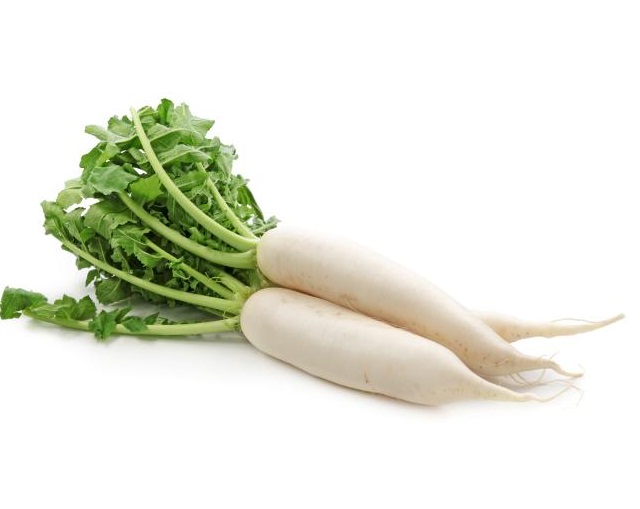 “Does the Eastern long white daikon radish have any advantages over the well-known at our lands types of winter turnips? Which type and how is it most useful?

«When turnip comes on the market, the pharmacists go to play cards» – a Chinese proverb, probably preserved for millennia.

This is an ancient vegetable – the testimonies show that it had been grown yet since 3000 years in China and Japan, and in Egypt it was painted among the frescoes of the Pyramid of Cheops (The Great Pyramid). It is not known when it came to Bulgaria, but for sure is grown from ages because it can be seen on one of the frescoes in the Boyana Church, which dates from the 13th century. And it is mentioned in the folk tales as well. You remember the favorite “Grandpa pulls turnip” from Ran Bosilek?

Daikon radish is of the white type of long turnips. It is among the main types produced in Asia, as it is more often boiled in China and marinated in Korea. It is predominantly served in the form of fresh juice for blood purification and stimulation of appetite in the West. Daikon is nothing more than the well-known in Bulgaria white turnip. Therefore, it is suitable for salads, pickles and garnish in small amounts. Unlike the known turnips, however, their Japanese brother is with much softer and subtle taste and definitely is more watery. It is rather suitable for fresh salads in combination with carrots and beetroot.

The fans of dietary nutrition will appreciate even more its qualities because on the background of the entire luxury of healthy ingredients turnip is rich in plenty of water (93%) and respectively poor in energy – there are only 18 kcal in 100 g. It is rich in lysozyme – a substance with extremely strong antimicrobial action. Mainly raw and finely grated, turnip stimulates the immune defense. Singers often consume it in the form of concentrated bouillon in order to clear their voice before going on stage. It also contains fibers, magnesium and large amounts of iron, which are needed by the body in the cold months. Moreover, the turnip is a boon for the urinary tract, as it is one of the few natural products that are used for destruction of kidney stones. The white root vegetable is rich in protein and carbohydrates, which stimulate the function of liver and kidneys. It is also good to mention the turnip’s leaves. They even surpass it in terms of vitamins and microelements – vitamins C, K, A, also calcium, phosphorus and magnesium. Salad can be prepared also from them.

Breakfast is a mandatory element of the human health regime

Why water consumption is so important?

Tomatoes – raw or roasted are healthier?