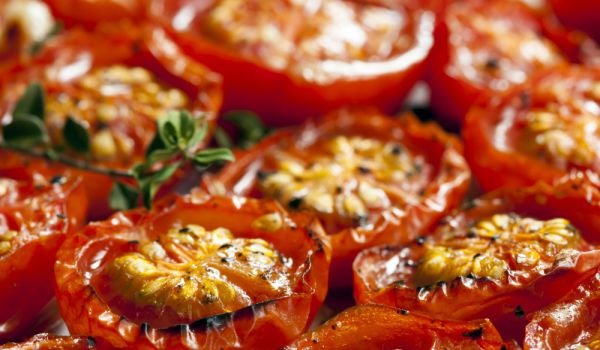 Tomatoes – raw or roasted are healthier?

Does the fashion baked tomatoes to be offered as a salad increase the benefits of this vegetable?

Great question whose answer will probably surprise you.

Tomato is a wonderful fruit which is perfectly combined with all other vegetables and no matter it grows at our latitudes and is present in almost all Bulgarian recipes, South America is tomato homeland. Europe got familiar with it during the Great geographical discoveries.

Tomatoes are a perfect source of lycopene – a phytochemical which makes them red and has remarkable anti-oxidant properties. Lycopene is a carotenoid, one of the most powerful anti-oxidants. It is a “hunter” of the free radicals which the organism releases in metabolism and have to be discarded as unnecessary and poisonous. More recent studies show that lycopene can increase its action and become more bioavailable for the organism after heat treatment of tomatoes.

Baking the tomatoes increases the level of anti-oxidants they contain, although it also reduces the amount of vitamin C found in the fruit-vegetable.

In the latest issue of the American edition of the Journal of Nutritional Biochemistry results from a quite interesting study about tomatoes are presented and the conclusion is that “the heat processing augments their nutritional value by increasing the content of the absorbable lycopene, as well as the total antioxidant activity of tomatoes.”

Here’s the data from the study: three groups of tomatoes are heated up to 88oC for 2, 15 and 30 minutes respectively. Vitamin C content decreased by 10, 15 and 29% compared to the raw, uncooked tomatoes, but trans-lycopene is increased, notice, with 54, 171 and 164% respectively. Cis-lycopene (better absorbable) increases its content relatively with 6, 17 and 35%.

While the antioxidant activity of tomatoes is increased during the cooking process, the loss of vitamin C is due to the oxidation of dehydroascorbic acid to nutritionally inactive forms. Lycopene is the most efficient anti-oxidant, 10 times stronger than vitamin E, making it an important component in our diet.

So, give yourselves a variety of tomato pleasures in any form: raw, but also baked in vegetable dishes and separately.

The melon and its seeds