This attractive sunny wild flower, besides adorning the green meadows in spring and early summer and we play with its fluffs when we are children, it has many healthy properties.

In China, they call dandelion “the Ginseng of the West”, and its other ancient name is “Balsam of the sun’s rays”. In Ancient Greece the pilewort, as it is also called, was mostly used for treatment of eye inflammations, from which comes its Latin name – Taraxacum, which means “eye inflammation”. And today it is pointed as one of the plants involved in experimental therapies against cancer.

The name “dandelion” is not accidental. If the fruit seeds come into the ear of a person, especially children, hearing problems can occur. The yellow flower is a cousin of chicory and in some places is cultivated entirely for healing purposes.

The usable parts of dandelion are: the leaves which are picked up in spring, the stalks, collected during flowering and the root, harvested in autumn, when the foliage begins to wither.

It contains tanning, resinous, mucous and protein substances (about 15%), phytonutrients, as well as organic acids, sterols, fats, choline and inulin – a natural prebiotic.

The bitter taste of this edible healing plant is due to the substance taraxacin. This ingredient stimulates the production of bile juice and promotes the work of the gallbladder. The glycosides in the dandelion content enhance the action of the pancreas and thus insulin release is increased, which makes it a particularly suitable mean in diabetic patients. Not accidentally, dandelion tea is recommended and used frequently by diabetics.

The blood vessels are severely affected in atherosclerosis: the blood circulation becomes problematic due to the accumulation of plaques and blood components on their internal walls. Our dandelion is one of the means to improve the circulation and to cleanse the blood.

Folk medicine classifies dandelion as a cleansing and anti-inflammatory herb.

By controlling fat metabolism and lowering cholesterol, dandelion products – natural in salads, juices, infusions or potions, keep the blood vessels clean and flexible. The improved circulation also has a positive effect upon the health of the entire cardiovascular system. The leaves of fresh dandelion act as a diuretic – they increase the release of liquids and protect from congestive conditions and inflammatory processes in the kidneys. A small handful of fresh dandelion leaves can regularly enrich the seasonal salads from early spring to late autumn.

Dandelion has been recently used also in the frequent disease of our time – fatty liver disease (steatosis) – a state of fat accumulation in the organ. When the condition progresses, liver cells are replaced by connective tissue and inflammation and cirrhosis develops at the end. Some studies show the curative effect of dandelion in connection with its draining properties.

Now is the right season to take advantage of its beneficial properties and to prepare a fresh salad from the leaves, as well as to pick flowers and leaves for tea in winter.

Here’s my favorite recipe for fresh salad with dandelion leaves:

After washing the dandelion leaves, they are soaked in salted water for about 30 minutes in order to remove the bitterness. You may add leaves of fresh spinach or sorrel, if you want. They are torn to small pieces and are mixed with a sauce of yoghurt, some olive oil, salt and pepper. They are sprinkled with crushed walnuts and served with cherry tomatoes in different colors.

Dandelion flowers can be used for honey production from the small yellow flowers. Dandelion honey is rather a jam from the flowers, because the bees have nothing to do with its production, but it is very tasty and as you can guess, there are many health benefits. 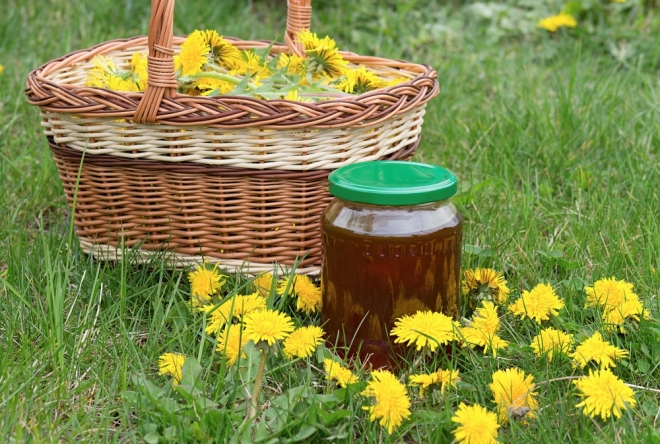 In addition, obtaining the flowers is associated with a walk in the nature, and this is always a great idea.

Every third child over 7 years weighs more than normal